The communication conference was a great success once again.

It was fabulous to see so many people using AAC systems. Seeing people with Angelman Syndrome communicating in such a natural way was also very inspiring for those who are new to their communication journey. 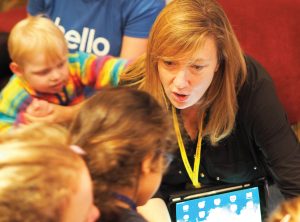 We were honoured that Jane Farrall returned for our second conference and she started off the professionals’ day by giving a comprehensive overview of communication. Tabi Jones-Wohleber then discussed her ‘Model as a MASTER PAL’ training series. These free resources are available at: http://bit.ly/ModelasaMASTERPAL training module and discuss the different aspects of modelling. These are suitable for beginners and those looking to improve their practice. Sarah Rivard took the place of Erin Sheldon at the last minute. Sarah is mum to Hannah who has Angelman Syndrome and is a teacher in Canada and as such has insight from both her professional and personal life to discuss building positive relationships. Rosie Clark, Livvy Hepburn and Carly Hynes then discussed how they influenced their schools to become communication positive environments.

After lunch we had Teach Us Too speaking for the first time. Jonathon Bryan is the teenager behind the Teach Us Too campaign, he attended the conference with his mum and his teacher, they discussed his journeyboth before and after he had accessto his communication alphabet board. Jane’s session in the afternoon was on Building Language Through Emergent Writing explaining why writing is crucial for everyone and how to make it accessible. The AAC showdown gave a quick overview of the most commonly used systems for people with Angelman Syndrome, namely, PODD, Proloquo2Go, SuperCore and Snap plus Core First. The last session of the day was an update on research carried out by The University of Birmingham on communication and Angelman Syndrome.

The day was very positive with some teams even staying behind to start planning implementation for the following week. We have already had positive reports from some of our families saying that practice from their professionals has changed already. 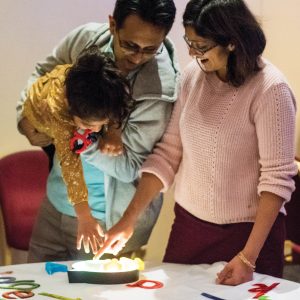 Carly Hynes and Tracey Campbell started the day discussing Aided Language Input using Core Boards and Aided Language Displays followed by Jane who explained why these alone aren’t enough. Tabi then repeated her talk on her ‘Model as a MASTER PAL’ series. This was followed by Jane and Tracey discussing common pitfalls and solutions when implementing communication systems at home. After lunch, Jane discussed literacy and communication and Rosie shared some hints for getting the team on board. The sessions then split into workshops for the remainder of the day. 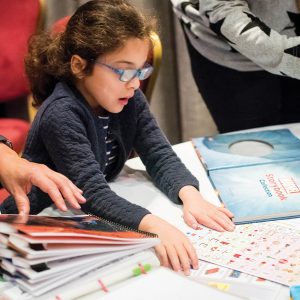 The highlight of the weekend for everyone! Sessions involved a mix of games, literacy and communication. We had several comments on how the sessions had given everyone ideas on how to bring communication home and most importantly how to make it fun. 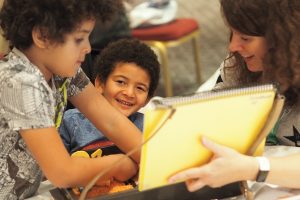